Working for Nature Trainee, Kayleigh Wright went along to help ring the Derby Cathedral peregrine chicks, here she is to tell us all about it....

It’s been over five months since I started my traineeship with Derbyshire Wildlife Trust and I’ve encountered some really fantastic moments in nature. But never did I ever think I would experience getting up close to Derby Cathedrals resident peregrine falcons and watch this year's chicks being ringed.

In 2004 a pair of peregrine falcons chose Derby Cathedral as their home. After two years of unsuccessful breeding, the pair finally laid their eggs later that year in 2006. It was all thanks to The Derby Cathedral Peregrine Project as the team came together to build a wooden platform half-way up the tower where the peregrines were able to nest and lay their eggs.

The peregrines hatched three eggs this spring and I was very excited to receive an invitation of a lifetime to get a behind the scenes front row seat of the chicks being ringed by licensed ringers Dave Budworth and Chloe Pritchard. I had never seen peregrine falcons before and so it was an invitation I couldn’t say no to!

I met Nick Brown (wildlife enquiries officer for DWT and founder of the project), Nick Moyes (Technical advisor and co-founder of the project), Gillian Foxcroft (DWT volunteer and Trustee) and ringers Dave and Chloe. Myself, Gillian and both Nicks made our way up the 189 steps to the top of the tower where Nick Moyes was setting up his climbing gear. As he swung the rope over the edge of the tower, one of the peregrine adults (which we believe to be the female) was startled and fled the nest, soaring through the sky. I watched her circle the tower through my camera viewfinder but found it difficult to keep up with her speed, I was truly mesmerised.

Nick bravely abseiled down the tower towards the nest where he carefully handled the chicks and lowered them down to safety where Dave and Chloe were based. Myself, Gillian and Nick Brown made our way back into the cathedral where Dave and Chloe were getting ready to ring the chicks. I watched as these little bundles of soft feathered chicks with their sharp talons and large round eyes had their individually numbered rings carefully placed around their legs. Dave asked if I would like to hold one whilst the other was being weighed and so I sat with a peregrine falcon chick held in my arms. It was a moment I’ll never forget, a peregrine falcon chick held in my arms, soon to grow to be the fastest bird in the world.

The chicks were carried safely back up to their nest and when I arrived home, I checked back on the live webcam and saw the three chicks huddled together with their beaks open ready for their mother to feed them. It’s been eye opening discovering more about urban wildlife and how these beautiful birds create a life in the city. I look forward to staying up to date with the project and following the little ones' journeys as they grow. 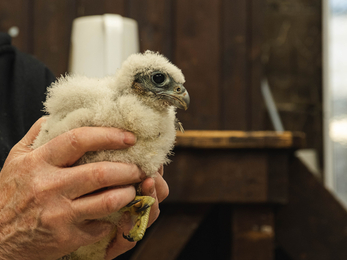 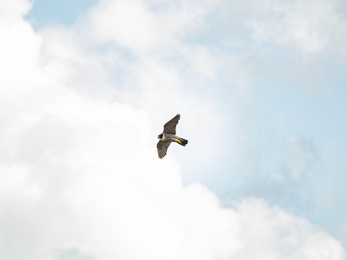 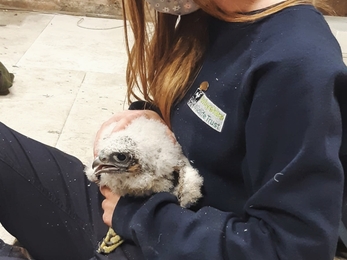 The Challenges Faced by Farmers

Whilst farming as a way of providing food from a settled activity can be traced back 12,000 years, agriculture as we know it today in…

A local care home takes part in #growdontmow and #30dayswild!

MHA Moorland House celebrates World Bee Day with a week of Bee activities and takes part in #growdontmow and 30DaysWild!

Amanda Elahi tells us about her experience as a Trustee for Derbyshire Wildlife Trust.

Our final blog in our Volunteers Week series has been written by Amanda Elahi, one of our newest Trustees.